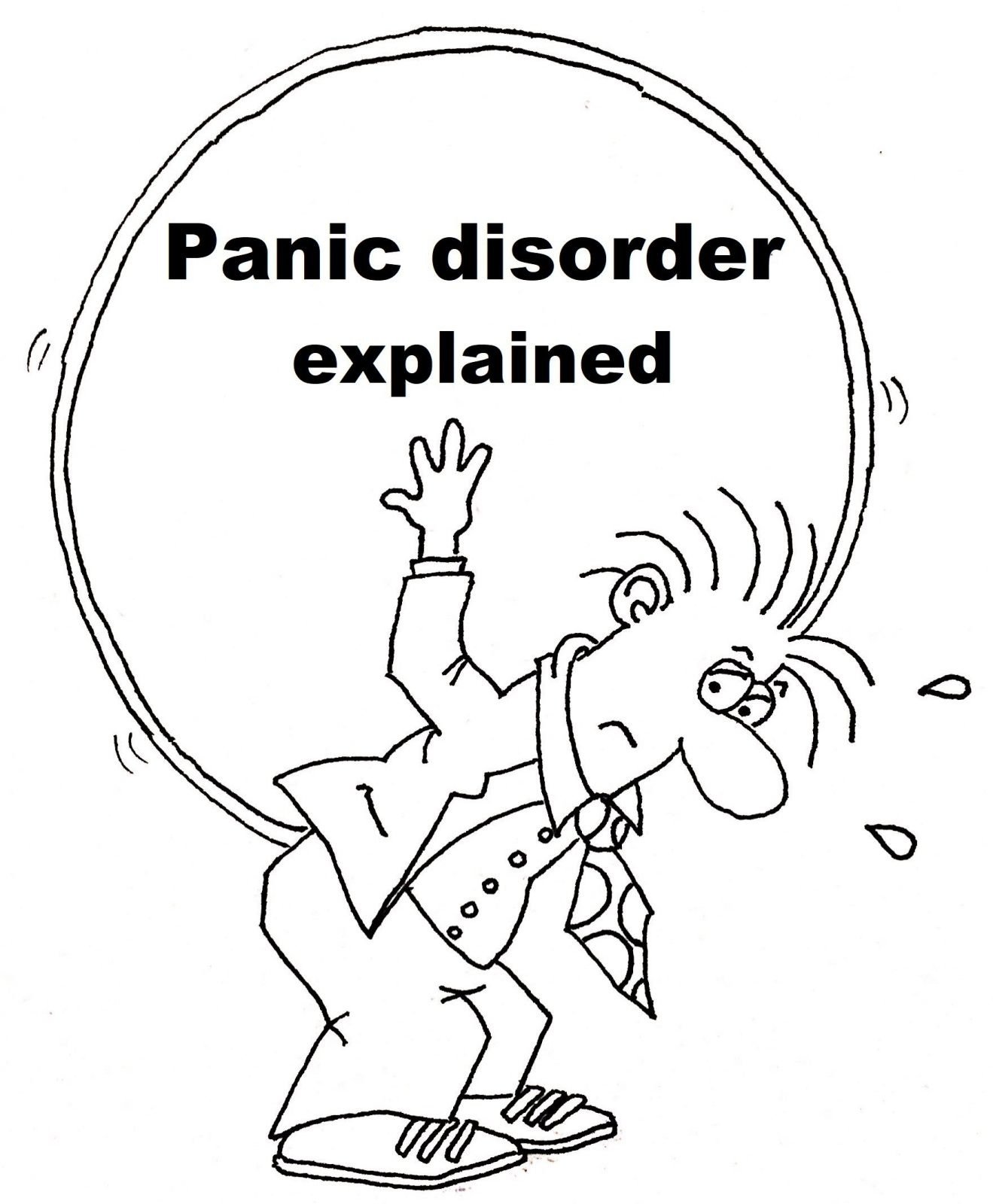 by Kim Rosenthal, MD
Blog, “Mental Health and You”

Panic is a sudden attack of intense fear that typically lasts 10-15 minutes, although these attacks can last longer.  They often leave the sufferer so distressed they change their routine to avoid having another.

Episodes of panic are more common than you’d think: one in ten Americans has an attack every year, and about a third experience panic at least once in their lifetime.  Even then, only 3% of the population are diagnosed with panic disorder.

The formal definition. According to the Mayo Clinic, “a panic attack is a sudden episodes of intense fear that triggers severe physical reactions when there is no real danger or apparent cause.”  Panic attacks are often characterized by palpitations, chest pain, problems breathing or a choking feeling, sweating, and shakiness.  Nausea, dizziness, numbness or tingling sensations, feelings of being detached from reality, and fear of going crazy or dying are also common.

The informal definition. Panic attacks are hell.  Check out Tessa Miller’s Nine people describe what it’s like to have a panic attack.  In the article, one sufferer describes panic attacks like “being held under water with no way to come up for air.”  Another person in the article reports it’s like being hanged upside down.  “The physical symptoms are unlike anything else I’ve felt: a tightness in my chest so pronounced it actually feels like choking, dizziness like I’ve been hanging upside down for hours, tingling legs and numb hands. The exhaustion the next day is also uncanny. Your brain really makes your body pay for it.”  Fear is the major component.

The first time.  If you’ve had panic attacks before, you know how they start.  That first episode usually arrives without warning.  Suddenly it seems your world tilts sharply under your feet and you feel yourself slipping off the edge.  Your first stop is probably a visit to the emergency room.  You fear insanity, heart attack, stroke, death itself, and there doesn’t seem any option but a desperate search for help.  Doctors give you medications to abort the attack, if it isn’t over by then, and they run various tests.  Everything is normal.  It almost always is.  Eventually you leave the ER with a diagnosis of panic attack.  You’re physically well but terrified it’ll happen again.

Terrified it’ll happen again.  There’s the problem: panic is so scary that the sufferer obsessively dreads having another attack.  This sometimes leads to agoraphobia, where the individual restricts their actions sharply to ensure they don’t have a panic attack –avoiding at first the situation where it happened, then avoiding crowds, public transportation, conversation in line at the supermarket, closed spaces, open spaces and any situation where there’s no escape.  Occasionally this leads to fear of bridges, needles, doctor’s appointments, sleep, pills, everything.  Some people begin to fear their very thoughts, and they play involuntary games with themselves trying not to think about panic, for fear of causing an attack.  These fears cut away at the person’s freedom little by little until they have difficulty leaving home.

Panic attacks.  Panic attacks are very common and can be associated with almost every mental health problem in the books.  For example, people can have depression with panic attacks.  That’s officially diagnosed as depression “with anxiety distress specifier.”  According to one study, 17% of people with depression suffer from panic attacks.*   You can also have substance use disorder, social anxiety, specific phobias, obsessive compulsive disorder, post-traumatic stress disorder, and even mania with panic attacks.  Some medical conditions can also cause or resemble episodes of anxiety, like overactive thyroid and a rare, usually non-cancerous tumor called pheochromocytoma.

Panic disorder.   Panic attacks becomes “panic disorder” when (1) the sufferer has had one or more panic attacks, (2) they live in fear of a repeat episode for at least a month after the attack ,  (3) the experience doesn’t have a clear trigger (for example, not caused by trauma or a phobia), and (4) the episodes aren’t caused by substance use or withdrawal, another mental health condition, or a medical problem.

The honest answer is we don’t know, but there are some theories:

Panic attacks often arise with trauma, stressors, and major life changes (like getting married or having a child), suggesting a strong environmental & psychological component.  Talk-therapies that help rewrite thought patterns are very effective in treating this disorder.  This means thoughts and experiences can both trigger and perpetuate panic.

There are many ways to treat panic attacks.  The busy picture above outlines some of them.  Refer to the light blue words for possible interventions.  This article focuses briefly on changing perspective (thoughts) and changing behaviors.

The cognitive intervention (or “changing perspective”)

This type of treatment is based on the premise that, in panic disorder, a person’s thoughts cause the symptoms and feelings of panic.  By examining and rewriting these thoughts, a person can overcome that fear.  This is called “cognitive therapy.”

For example, if a panic attack sufferer thinks, “My heart’s beating like it’s going to jump out of my chest.  Something’s really wrong with me.”  This thought usually triggers anxiety, which raises heart rate and in turn worsens anxiety.  It’s a downward spiral ending in an attack.

The trick is to put a wrench in the cycle.  There are many places that wrench can go (remember, some of the other possible interventions are listed in the diagram above in blue), and cognitive therapy is… well, for lack of a better word, the cognitive wrench.  The goal is to re-interpret the situation.  But how do you do that?

Pick whichever works for you.

In the example above, one might conclude: “I know the palpitations seem to mean a panic attack is unavoidable, and the more I think about being anxious, the more anxious I get, but objectively this is just a fast heart rate, nothing else.  My heart is healthy, and the cardiologist told me there’s nothing to worry about when my heart beats this way.  He said anxiety causes this, but it isn’t dangerous.  And I can work on the anxiety and calm myself down.”

The behavioral intervention (or “changing behaviors”).

The behavioral treatment for panic focuses on the action wrench: by changing your behaviors, you can reduce or stop fear.

For panic attacks, behavioral therapy is about exposure.  The individual is encouraged to slowly open themselves up to situations that make them anxious — and keep doing so until the negative emotion backs off.  Usually exposure work is done with a therapist and in small, slow steps.

For example, if the anxiety were linked to dizziness or darkness, exposure would involve using a swivel chair (safely and briefly) or sitting in a room with lowered lights.  If it were a fear of dogs, they would start with photographs of puppies, advance to images of big dogs and dangerous-looking dogs, then see a puppy through a window, etc.  The individual would start slow and increase the intensity of the trigger over time until they do okay with it full-force.

Exposure therapy is good for both panic and agoraphobia.

There are many drugs on the market used for panic attacks and disorder.

Selective Serotonin Reuptake Inhibitors (SSRI) antidepressants like Paxil or Prozac are the most commonly prescribed.  They work directly on the receptor sites that target anxiety but take a few weeks to take effect.

Serotonin Norepinephrine Reuptake Inhibitors (SNRI) antidepressants like Effexor and Cymbalta are also helpful and take about the same amount of time to become effective.

Both SSRI’s and SNRI’s are relatively safe, not addicting, and quite effective.

Soothing antidepressants like Remeron, although not directly indicated for anxiety, can have good results.  Tricyclic antidepressants (TCA) and monoamine oxidase inhibitor (MAOI) antidepressants are also very helpful for panic but have more side effects; for this reason, they’re rarely used as first choice.

Anxiety medications like Xanax or Klonopin, both benzodiazepines, are helpful in the short-term for panic but frequently stop working if taken too often.  Benzodiazepines are addicting and can become a problem for individuals prone to substance abuse.

Some blood pressure medications (like Clonidine or Inderal), antihistamines (Vistaril), and anticonvulsants (Neurontin) can be beneficial.  If the anxiety is bad enough, associate with agitation or another disorder, or doesn’t respond to other medications, doctors will occasionally prescribe a sedating antipsychotic like low-dose Seroquel or Zyprexa.

That’s panic attacks in a nutshell.  For more information, check out the Institute of National Institute Mental Health’s (NIMH) article on panic.

Enter your email address to receive the free e-book, "100 Ways to Take on Depression and Win," plus email notifications of new posts, freebie worksheets, and latest booklets.